Dear Hank and John is a podcast by duo Hank and John Green, also known collectively as the Vlogbrothers of Youtube fame. They began the podcast in mid 2015, and have been releasing them weekly ever since, with some brief intermissions and occasional guest hosts replacing either brother.

I came to the podcast since my job requires a lot of manual labor that is relatively mind-numbing, and requires some sort of soundtrack to make tolerable. As such, I spend a lot of time listening to podcasts and have plowed through hundreds of hours of audio in the last year. I have been a vlogbrothers subscriber since 2012, and I started listening to the podcast a month or two ago. I have since listened to all eighty-five episodes of the pod, and it’s very engaging.

Hank and John (or John and Hank, as John prefers) have awesome chemistry, and hearing them talk to each other directly rather than through alternating video blogs is weird, but they have a really entertaining back-and-forth. They also manage to be both serious and silly, which is a hard spectrum to nail, and they clearly enjoy making the show together and talking to each other. The brothers dispense what they refer to as dubious advice (and it usually is) for the first forty minutes of the show, and then for the last ten or fifteen they talk about their personal interests, Mars and the British football team AFC Wimbledon. The beginning of the show starts with light banter, and John reads a nice short poem. There are a lot of inside jokes in the community Hank and John are part of, but the show has inside jokes inside the inside jokes.

I personally enjoy the pod so much that I use it as white noise when I do work, or walk around. I would very much recommend it, it’s definitely one of my favorite talk-y podcasts at the moment. You can find it wherever podcasts are dispensed.

I set low expectations when I sat down to watch Katherine Ryan’s In Trouble. I am a student of the genre and I like to think I’m open minded, but there’s a quiet sexism that’s embedded in us all. Still, I like to give everyone a chance, and especially the few women who find success in such a male dominated industry. The thing is, In Trouble doesn’t need my condescension. It’s brilliant, maybe the best performance I’ve seen out this year. 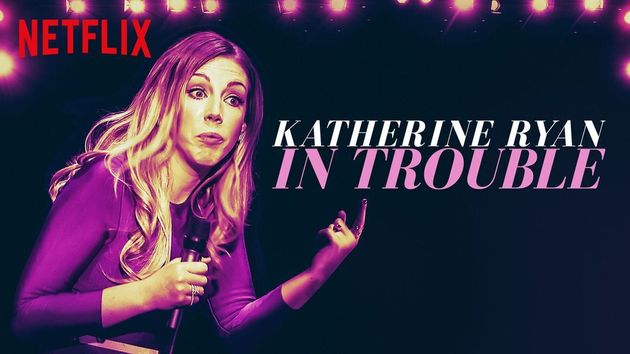 There isn’t a flat moment in the whole special, but Ryan’s clear strength is in story -telling, and form. She connects all of the threads of her story, working her jokes in with grace and dexterity. Her delivery is spot on, and her crowd work is the best I’ve seen in years. I saw a similar attempt in Michael Che’s Michael Che Matters last year, but like a lot of comics, Che used the audience to bounce jokes off of. That’s fine, and it works. But Ryan, ahhh. Her crowd work is a conversation, with the audience and the viewer. It makes her stories more vibrant, she brings us into her vision of that moment. The moments when she talks to the audience, listens and then responds to them, are some of the best in the hour.

Ryan doesn’t overshare, her personal details are relevant and funny, and her description of her family is a winning bit. Ryan describes her family with a degree of empathy, and manages to describe their peculiarities with a tone of semi-tolerance. She manages almost the impossible, acting authentic in some places and exaggerated in others. Her racial humor is hilarious, without offending this Jew, and her jokes about Canada and America were spot on. When Ryan talks about the women from her hometown who tormented her when they were young, you see them. You know these women, they’re from your hometown too. Her description of her relationship with her sister is sweet, and funny. Their closeness leaves plenty of room for comedy and jokes about the middle child, which were everything.

While I have no official stance on the Gif vs. Jif battle, GIFs are one of my favorite new forms of punctuation. Most of the popular GIFs are cats or sports, but some of the most precious GIFs are of the fantastic John Green.

For the few who are unaware of John Green, a nerd icon for the digital age, he is primarily known for quotes from his books appearing on tumblr. These books include Looking for Alaska; An Abundance of Katherines; Will Grayson, Will Grayson; Paper Towns and, most recently, the New York Times best-selling The Fault in Our Stars. The Fault in Our Stars, commonly abbreviated to ‘tFiOS’ by fans, has recently been adapted for film starring Shailene Woodley and Ansel Elgort, both also stars of Divergent, another YA blockbuster adaption.  John Green is a winner of the Printz Award, The Edgar Allan Poe Award, The Los Angeles Times Book Prize, and numerous others.

However, John Green is perhaps even better known on the Internet as one half of the “Vlogbrothers,” a YouTube channel  with more than 2.2 million subscribers. (As of July 2nd 2014.) He and his brother, the musician and entrepreneur William “Hank” Green, are the masterminds behind Vidcon, a yearly convention based on online video; the Project for Awesome (abbreviated to P4A) an annual charity project taking over YouTube for two days; and Crash Course, an educational YouTube channel that covers World History, US History, Literature, and more. The Vlogbrothers have tackled so many interesting and educational projects that just listing them would construct multiple blog posts.

Back to GIFs! John Green, aside from all of his other achievements, also is extremely GIFable. You’d be surprised. So collected here are the GIFs you need to express the full range of human emotions.