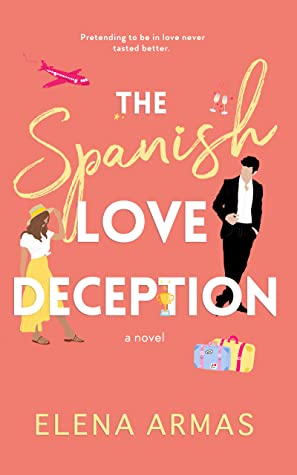 The Spanish Love Deception by Elena Armas has gotten a lot of attention in the romance community, and also became a NYT bestseller upon paperback release. I’d heard good things, although the book has also got some negative feedback, and I was excited to read it. I personally was middling on the book, I found it to be fairly average but enjoyable.

The premise is that Catalina Martín is returning to Spain, to attend her sister’s wedding, and needs a date. Her ex is engaged, and she cannot show up pathetically alone. To her great surprise, her coworker Aaron offers to go with her. They’re not friends- after getting off on the wrong foot, they’ve been barely civil. Still, as the date grows closer, Aaron starts surprising Lina, and she wonders if her taciturn coworker might be better company than first impressions indicated.

I really did enjoy this book, though it didn’t blow me away. Catalina is a very vivid depiction of a young woman in recovery from trauma, trying to succeed in her field. She feels very human and flawed, and she’s self-aware of the ways in which she can’t fully realize her hopes. She hasn’t had a romantic relationship recently because of her inability to trust, and she’s not able to consciously take that step without great trepidation. She still does have close friendships and positive working relationships, but Lina has mostly closed herself off to love. Aaron is a little flatter as a character then I would like, but he works as a love interest and his characterization is at least consistent.

I also liked the trip to Spain itself. Lina’s family was the perfect blend of loving and concerned, involved in her life but not too meddling. Lina standing up for herself, both in a work setting and with her ex, were some of my favorite parts of the story. I think the romance was pretty strong as well, with the central obstacles being a lack of communication and Lina’s trust issues.

I did think the book was a little bloated, it could have been trimmed down in some places and that would have made the story stronger. The pacing was a bit off because of the story being so front-loaded. I will say, the readers who talked about how often Aaron’s blue eyes were mentioned, and how big he was were not exaggerating. It did get a bit distracting at times how many different ways the author found to talk about his blue eyes. I also saw a lot of similarities to The Hating Game, which made a big splash a few years ago. Obviously, there are going to be some common threads in enemies-to-lovers workplace romances, and it didn’t feel too derivative. I do think that if you’re going to write a book where the love interest is already in love with the protagonist, you need to lay more ground. I think the book would have also benefited from dual points of view, to give the reader context for Aaron’s feelings for Lina. I think for a debut, it really is a great start. I look forward to seeing what comes next for Armas.

The Spanish Love Deception is available wherever books are sold. This reviewer was given a copy in exchange for an honest opinion.