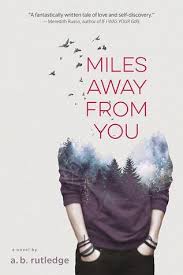 This book is so gorgeous- the writing, the characters, it is just so shiny. I loved it, right from the beginning. I do have to give this disclaimer, I am cisgender, so my opinions on what is offensive may not be fully informed. I do my best to be sensitive and understanding of the different life experiences of others, and try to listen to marginalized people and amplify their voices. That being said, the controversy around this book seems unfounded to me. I saw mostly cis, white women leading the outcry over the book, and frankly I had trouble finding queer people of color who had a problem with it. If any trans person or POC were to tell me that they found it troubling, that would be different, but I can’t really give credence to readers who haven’t struggled with either of these issues and claimed to be offended. I did think the marketing of the book, like the flap copy, was a little heavy-handed, trying to market the book to the LGBTQ+ community.

That being said, I loved reading about Miles. Epistolary novels are tricky, because you have to be able to give exposition without doing a huge info-dump all over your reader, and that can be difficult. Rutledge manages to weave details about Miles and Vivian’s lives in seamlessly to Miles’ lonely present, where he’s trying to figure out who is without his girlfriend. I really like the characterization of Vivian, she’s dramatic, and interesting, and someone we all have a version of in our lives. At the same time, she is flawed. We get the sense that she was a dramatic person, who demanded a lot from Miles. It seemed to me that their relationship wasn’t super healthy, but it is a hallmark of first love and teenage romance to have some unhealthy elements of neediness and idealization. I did think Miles’s feelings about having lost Vivian are brilliantly written- the survivors’ guilt, the feeling of restlessness and lethargy. His feeling of having been rejected by his community, and being blamed for Vivian hurting herself are so stark. In short, it’s a compelling, beautifully written account of a depressed person coming to terms with their new reality.

A lot of criticism of this book harps on Vivian being characterized negatively, to which I say, yeah. She tried to kill herself, she was depressed, she was a black trans woman rejected by her family. That’s a lot. And, like a real person, she’s flawed. The things she does aren’t all good or bad, and her relationships aren’t entirely healthy. This doesn’t make her a bad person, or a bad character, just a realistic one. There is a lot of positive characterization as well, how smart and funny she was, how charming, how warm. Vivian is described as the life of the party, dramatic, fun, creative, driven- a bunch of good things. Trans representation in media has to reflect broad, fleshed out characters, people with motivations, flaws, and weaknesses. Vivian’s flaws aren’t because she’s trans. Miles is flawed, too. All of the characters in this book, Miles, Vivian, Oskar, and Miles’ mothers, are flawed, and that’s part of the reason the book is good.

Initially, I thought the trip to Iceland was going to be boring, and I was mostly in it for Miles’ snarky narration, but it was really beautiful to read about. Oskar was a compelling love interest, and an interesting character. His conflict with his family, and what they were going through, was heartbreaking. Reading about Oskar and his dysfunctional, controlling relationship was equally awful, but immersive and heart wrenching. The book really does a great job of showing all of its characters as complex and dynamic, while not diverting too much from Miles’ story. In general, this book was well-written, touching, and hopeful. It might be triggering for those who have suffered from depression, lost someone to suicide, or experienced homophobic or transphobic violence. When read thoughtfully, it’s a message of hope, and acceptance. This book is about grieving and loving someone at the same time. It’s also about a young person experiencing a new place, and redefining his identity. It’s definitely worth picking up.